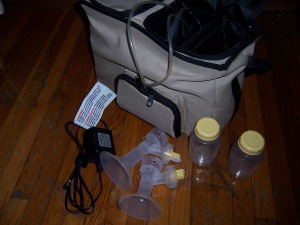 DISCLAIMER: This is a bit personal and may be a little TMI for some people.

I have been weaning down my milk supply for over a month, and I think I’m finally done pumping for comfort.  For 21 months I provided human milk for my son each day.  It is the end of an era.  It seems appropriate to take a moment to reflect.

Max received a diet of exclusively human milk (fortified with formula off and on) for nearly his entire first year of life.  To achieve this, I pumped for him 6 to 8 times a day for at least 25 minutes at a time.  That’s a lot of time.  In his second year, Max began receiving a whole foods blenderized diet in addition to a significant amount of human milk.  As the year progressed I began to wean my milk supply.  I heard of crazy hormone shifts and mood swings from other mothers who had weaned suddenly, and I didn’t want to add any more stress to my already stressful life.  So it would be a slow wean.  As an added benefit, I could offer my son a few extra antibodies through the cold and flu season – which would be even more important now that I am working in a hospital and bringing some brand new germs into the house.  I pumped 4 to 5 times a day, then 3 to 4 times a day.  As of April I was actively weaning.  I pumped morning and night for a week. then just morning for another week.  Then one day it was obviously time to quit.

After pumping for my usual half hour, one of my nipples was killing me!  I examined it and I noticed two good sized cracks or broken skin on the outer edge of the nipple.  Eeek! No wonder it hurt so bad.  I wondered how I could pump even once a day with this “injury”.   As I expressed my concerns to my husband, the voice of reason said: “Stop!  This is your body telling you it’s time to stop!”  This coming from a man who has always been in great support of breastfeeding, I knew I had to listen to him.  He was right.

Those first couple of week felt weird.  I’d be doing something in the middle of the day, stop suddenly and gasp.  In a split second I would think:  OMG, I need to pump!  When did I last pump?!  Then in the next split second I would think Oh right, I don’t have to do that anymore.  And when I got engorged five days after later I thought I had mastitis, cancer, a tumor…I hadn’t felt engorged in over a year- I couldn’t remember what it felt like!

At any rate, this era of my life that has come to a close.  When I think about all that time I must have spent pumping, I can’t believe I made it all work.  When did I find time to wash all those bottles and pump parts?  I remember several occasions on which I was just getting ready to head out the door to run an errand or do something fun, when I realized that I had forgotten to pump.  For quick errands I could get away with it, but on other occasions I had to drop everything and do at least a quick pump before I left.

It was tough, being a “slave to the pump”, as they say.  Exclusive pumping is much more difficult than breastfeeding (not that I’m an expert, as I have never breastfed).  It is a route for only the most stubborn and determined mothers.  And no woman need feel like less of a mother because exclusive pumping didn’t work for her.  I would never recommend it to anyone, and I know other mothers in my shoes who feel the same way.  I’m glad I did it, I’m glad it worked out for me and my family, I’m glad I was able to give Max the best nature can offer, but I wouldn’t wish it on anyone else.  I’m happily saying farewell to my breast pump and welcoming the new found freedom.  Now I only have to schedule my life around Max, one factor is taken out of the equation.

I had planned a beautiful home birth with a midwife I had the utmost confidence in. I spent the last month of my pregnancy meditating through birth affirmations. After a beautiful pregnancy, the unexpected happened. My son was born on July 12, 2011 with hypoxic ischemic encephalopathy. Which is just a fancy way of saying oxygen deprivation and blood loss. He was gray when they pulled him out of me. We spent the next four weeks at hospital about 45 minutes away from home. He came home with a g-tube, a surgery to keep him from burping and throwing up, and a very damaged brain. This is my story of trying to raise my son as naturally as possible while in the thick of the medical world.